UPDATE May 2, 2019: Our event at Mt. Airy Nexus was a resounding success! Thank you to everyone who attended. You can view our Q&A moderated by Stephanie Renee and documented by Mike Dennis of ReelBlack. Photos from the event are by Stephanie Malson. We will reconvene for a brown bag lunch session at the end of May. Watch this space for more information. 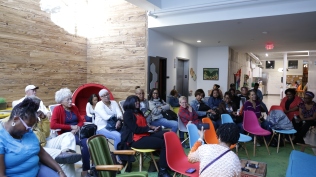 Our goal at S.I.F.T. Media is to amplify the work of and create opportunities for Black Women content creators.

It is not a secret that Black Women filmmakers are grossly underfunded in cinema and television. Despite this fact, we still create, by any means necessary!

The three Directors– Tatiana Bacchus, Yolonda Johnson-Young and Nadine M. Patterson– continue to fundraise. Please consider lending your support. Click on each title to go to the donation page for each project. Thank you!

Haitian master painter Ulrick Jean-Pierre channels his ancestors and pours his soul onto the canvas with exacting detail and visceral impact. Ulrick introduces audiences to the artist, his prolific body of work and it’s significance to the story of Haiti and the Americas. Ulrick is a rallying cry to herald the coming of a master who has earned his place in the conversation of artistic excellence.

Harriet Tubman Haiku Film Project (working title) is a meditation on resistance, history and nature. In collaboration with world-renowned poet Sonia Sanchez, the Harriet Tubman Haiku Film Project will be the first in a line of projects using the Haiku form along with the medium of film to reveal the herstory and history of African people in the Americas.

Told from a mother’s perspective, Finding Elijah is a documentary film that follows a young man’s journey from home into mental illness, homelessness and ultimately suicide, using interviews, archival footage and original art and photos. It explores how a search for answers leads a mother to action. The film will be used as a teaching and healing tool to assist individuals and families affected by loss through suicide.

S.I.F.T. Media Fundraiser is brought to you by HipCinema Labs

HIPCINEMA LABS mission is to develop and produce film works that speak to socially-conscious themes and subject matter.  We will champion diversity and cultivate home-grown talent by providing a platform which fosters production skills, technical proficiency and media literacy. We create space where participants can demonstrate their artistic potential in a hands-on, real world media production setting.