After absconding with illegal drugs that wash ashore on the Mayan coast, three Mexican fishermen sell them to the corrupt local police for a handsome sum. An experimental documentary that uses fictional elements, Al Más Allá places the personal moral degeneration of the fishermen in the political context of a nation struggling on the edge of the global economy. Lyrical, visually intriguing, and entertaining, Al Más Allá is at once reportage into the expansive world of drug trafficking across Mexico and an ironic indictment of the cult of the documentary filmmaker whose romantic visions of herself and her mission often obscures the very truth she seeks. Lourdes Portillo will not be in attendance due to personal emergency. [Below is a photo from event. Nadine Patterson and Veronica Castillo-Perez lead discussion after Al Más Allá.] 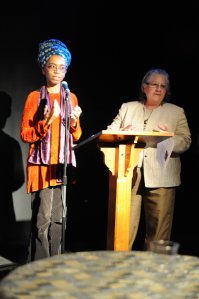 El Sol Sale chronicles the rapid growth of the Mexican community in the historically immigrant neighborhood of South Philadelphia. Told through the first hand experiences of the main subjects who have been a formative part of this development over the last 20 years, a collective story of the community unfolds. However with growth and assimilation, come problems, resistance and efforts to organize. El Sol Sale presents stories from the subjects’ memories, reflections and perspectives about the complexity of searching for a better life in a country that is not one’s own. (US, 2010, 40 minutes)