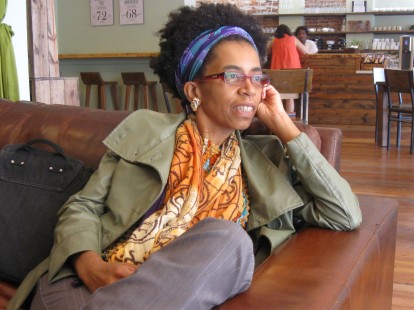 For me, the works … have to do with recovering memories before they are erased by the gentrification of the place I call home. Artists document their herstory/history. I document them. We honor our living, our dead and our ancestors. As Ursula says, ‘We are, we live, we matter’. — Nadine M. Patterson

3820 (USA, 1989, 6 min) Celebrate 50 years of marriage with Mr. and Mrs. Green, two members of the Great Migration North of the 1920’s. Learn how they met, fell in love, and started a family Up South. Produced through the Scriptwriting Workshop with Toni Cade Bambara and the Production Workshop with Lamar Williams at Scribe Video Center.

Anna Russell Jones: Praisesong for a Pioneering Spirit (USA, 1993, 26 min) Meet Mrs. Anna Russell Jones, a textile designer in the1920’s and 30’s, a WAAC during World War II, and a nurse in the 1950’s- a professional career woman ahead of her times. Produced by Marlene G. Patterson.  Narrated by Toni Cade Bambara. Music by Warren Oree and the Arpeggio Jazz Ensemble.

Cosmic Trane (Philadelphia, 2003, 14 min) Cosmic Trane is an experimental video that uses music, movement, visual art, and documentary footage to convey some of the issues explored in John Coltrane’s music. Music performed by the Odean Pope Trio. Artwork by Theodore A. Harris. Dance and choreography by Germaine Ingram.

Montessori Genesis II: A Family Thing (USA, 1991, 8 min) Unhappy with your child’s schooling? Don’t call the principal; start your own school! That’s what a group of working class African-American families from the Mantua community decided to do over 30 years ago, and as this short video testifies, the results have been astounding. Produced by Montessori Genesis School and  Scribe Video Center.

Items Designed By and For My Enslaved Ancestors (Philadelphia, 2016, 2 min) This lyrical documentary shows artifacts from the LEST We Forget Black Holocaust Museum of Slavery in Philadelphia, intercut with verses by Phillis Wheatley from 1765. Original music composed and performed by Heather Pinson. Produced through the Visiting Documentary Filmmaker Residency at Robert Morris University.

LickFilm (London, 2004, 2 min)  An editor grapples with his love/hate relationship with film. Voice over is in four languages: Portuguese, English, Spanish and French. “If you are not sure which side is the emulsion side, you can wet you finger and touch it. Or you can put it between your lips and lick it”. Written, directed and edited by Nadine Patterson. Dancer/Choreographer Jonathan McDermott. Music by Lenny Seidman and the Spoken Hand Percussion Orchestra. Director of Photography Jean-Philippe Tremblay. Vocals (in order): Manu Dellape, Carlos Navarrete-Patino and Ailise O’Neil. Produced through the London Film School 2004. Shot and edited on 16mm film. All effects were done in-camera.

Release (London, 2005, 13 min) This film is about the power of dance to communicate the things that we cannot express in words. Husband and wife dance couple separate when she pursues a career overseas.  He stays behind to raise their daughter with his mother.  Starring Jonathan McDermott (father/Courtland); Kiera-Lorelle Rhomes (daughter/Skye); with Sia Kpakiwa (wife/Mira) and Hazel Carey (Grandmum Hazel). Directed and edited by Nadine Patterson. Music by Nick Norton-Smith. Director of Photography Jean-Philippe Tremblay. Shot on Super 16mm Fuji film.

Moving with the Dreaming (Australia, 1997, 29 min) Explores the cross-cultural collaboration between African Americans and Aboriginal and Islander Australians in the area of modern dance and social activism. Produced by Marlene G. Patterson. Music by Warren Oree and the Arpeggio Jazz Ensemble. Original choreography and performance by Bernadette Walong.