This quote is on a Peace Site Bench at the Painted Bride Art Center in Philadelphia. It was one of three benches created by poet Sonia Sanchez and illustrator Leon McDuffie for the exhibition I curated called “Freedom, Fire & Promiscuous Meetings”. The works in the gallery were about the Middle Passage, Slavery, the Anti-Slavery Movement, and the history of progressive struggle in Philadelphia.

The story of American Chattel Slavery is not simply a tale of bondage, exploitation, and cruelty- but of Resistance, Transformation and Triumph. If you are a person of African descent, you are here because of the collective genius of our ancestors. They prepared the way for us, so we could live our lives in joy and freedom.

Take heart in their success. Build on it. Claim it.

If you are not black, please take the opportunity to work with us for justice and equality for everyone.

If you are white there is redemption for you in the struggle. The sins of the father and mother can be forgiven if acknowledged. And the privileges of whiteness can be used in the service of justice.

In 1838 a group of Philadelphia Abolitionists, black and white, male and female, built Pennsylvania Hall at 6th and Race Streets. It was a place for the peaceful exchange of ideas on voting rights, racial equality, and the womens’ question. It opened on May 13th 1838 and was burned to the  ground by a mob of 10,000 men on May 17th 1838. The mayor and the fire department stood by and let it burn. 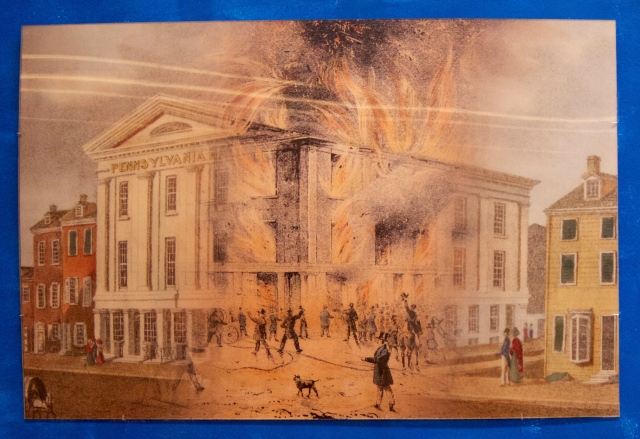 “The Burning of Pennsylvania Hall 1838”, images courtesy of the Library Company of Philadelphia. Concept by Nadine Patterson. Fabricated by Silicon Gallery’s Rick De Coyte. On view at Silicon Gallery, 139 North 3rd Street
Philadelphia, between Race and Arch on 3rd until August 31st.

A group called MOVE spoke out against injustice. On May 13th 1985 the City of Philadelphia assaulted their home with a fire bomb. The police and fire department let it burn. Men, women and children were killed. An entire community, 61 homes destroyed.

Every time you stand up against police brutality, you stand for Peace.

Every time you stand up for pay equity, you stand for Peace.

Every time you mentor or educate a young person, you stand for Peace.

Every time you build bridges of understanding between communities, you stand for Peace.

We need more warriors for Peace.

When Peace rests on the

wings of a butterfly,

joy flutters in my heart.

One thought on “Peace & Freedom”