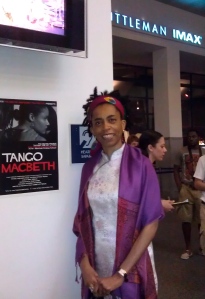 Thanks to everyone for coming out on June 21st at the Philadelphia Independent Film Festival. 187 people came to experience Tango Macbeth. The sound and image is truly awesome in that space. The acoustics are amazing. The 3-story image is powerful. Tango Macbeth is a film that must be experienced BIG! Scale makes a difference in our impression of time and space. On the small screen the film is okay. But in order to get the full impact it must be seen in a theatre on a large screen with big sound.

Hats off to Katherine, Cory, and the rest of the crew at the Franklin Institute for making us feel a home. Thanks to the hardworking staff of the Philadelphia Independent Film Festival: Ben, Steve, and Melissa. You made us feel like superstars showcasing our film at the IMAX. Thanks to the Philadelphia Inquirer and Carri Rickey for the mention in her write up on the three film festivals happening this week in Philly. And finally thanks to the wonderful audience of cast, crew, supporters, and film lovers who turned out to see the film. You are all awesome!——Nadine Patterson, director